Hi and happy Thursday! Lately, I've been using my Eclips machine to cut out favor boxes for Halloween. SVG Cuts has a new one for Halloween called "gimme candy boxes". This is the first box that I made. It is in the shape of a tombstone. So cute! Everything I cut is on the svg file. Even the spiderweb border. 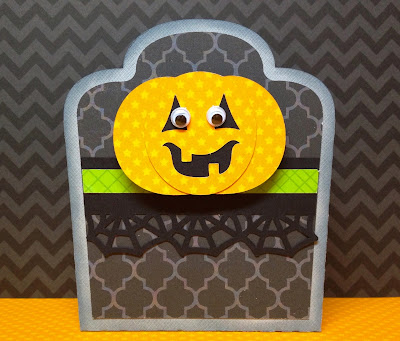 I wanted to give the pumpkin more dimension and movement so I put an action wobble thingy behind it. The 2nd photo looks blurry because I was trying to take the picture of the pumpkin in action. 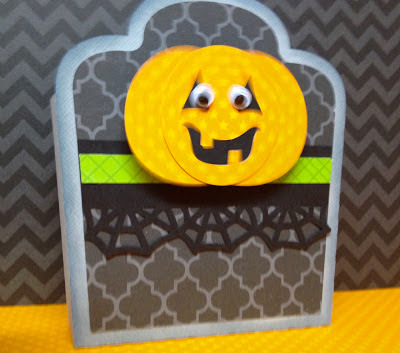 I stuck on those googlie eyes which I found at Ben Franklin Crafts. 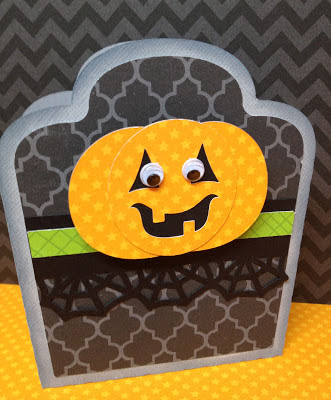 I'll be back with another favor box that I cut from the same file.
Have a great day everyone!!!
Posted by Cheryl at 11:56 AM

Cute favor, Cheryl!Can't wait to see the other ones you make.

I'm loving my Vagabond but you're reminding me to use my eclips...I think I need another power strip!

Aw so cute, I've got those action wobbles but haven't decided to play with them yet... LOL! Cute treat box...
TFS Cheryl - enjoy your Friday and up coming crafty weekend!

Oh cute candy box. I will look for the Eclips cartridge and wobble thingies. Did you print out instructions for the peek-a-boo card you demonstrated on Joy of Crafting? I was too slow to follow you even after I re-watched it. LOL! Thanks for helping me learn new things.

You have some great Halloween ideas! I am glad that you are still crafting and posting! hope all is well. have a wonderful week!