Give me something good to eat

Wow, it's been awhile since my last post. I've been busy cutting kits for all the make & takes that we've been doing. In the midst of all that, I made this shaker box using the Sizzix XL die called ornate box. 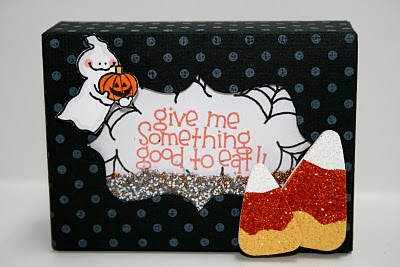 I had a really hard time finding Halloween paper in August so I made my own using Hero Arts dot cling stamp which is one of my favorites. All the stamps used are Dandelion Designs. The glittered candy corn is a new Sizzix die that was just released and these were extras from cutting kits. 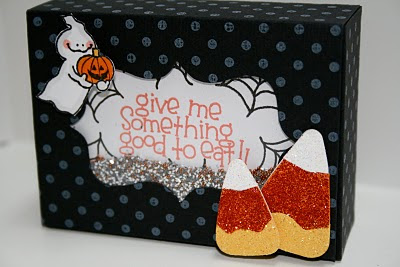 This past Saturday we did 2 make & takes and the first one was for Ben Franklin Crafts Pearl City's paper party. We made a candy holder using the scoreboard cupcake holder die and a new tombstone die that was also just released. And I can't believe that I forgot to bring the die so the ladies could cut out the letters. 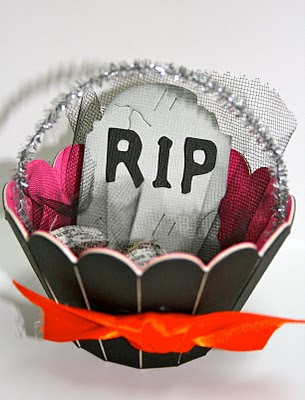 The 2nd make & take was at J's. We made a Halloween scrapbook using a new die called fanciful album. The cover is actually black fabric and if you look closely, you can see the design on the material. We also used a new embossing folder with spiders.

It really added to the background. We used chunky white glitter on the candy corns which gave it a different look instead of using 3 different colors of glitter. 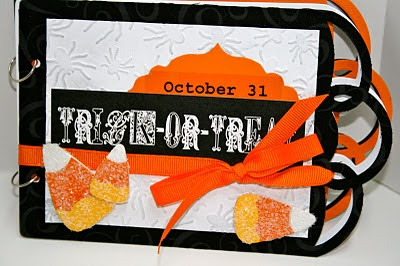 Still cutting kits for this weekend's make & takes. Thanks for hanging in there while reading this long post. Have a great week and I'm looking forward to seeing everyone again this weekend!
Posted by Cheryl at 11:22 AM 7 comments:

Email ThisBlogThis!Share to TwitterShare to FacebookShare to Pinterest
Labels: Give me something good to eat

Here's another shaker card that I made over the weekend also using the new Dandelion stamps.
I used last years pumpkin nestie which was a limited edition die to make the shaker part. I didn't want to throw away the small cut out piece so I placed it behind the fence. 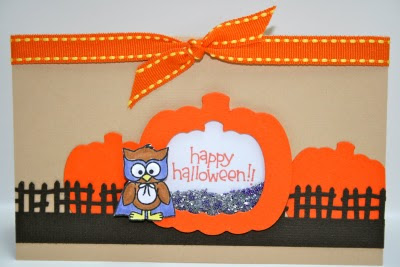 Love the spooky fence punch that I picked up recently. 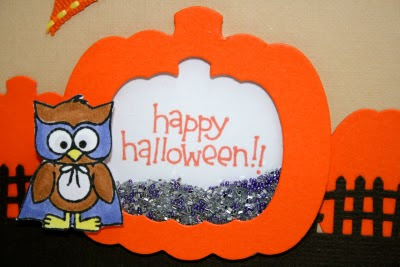 Here's a closer look at the shaker part. I used chunky glitter again and MS purple micro beads.
Thanks for stopping by and have a great evening!!!
Posted by Cheryl at 11:58 PM 6 comments:

Email ThisBlogThis!Share to TwitterShare to FacebookShare to Pinterest
Labels: Hooty

Hi there! Guess I've been neglecting my blog lately. I'm working on some make and takes that are coming up and will probably be quite busy until everything is finished. In the meantime, I made a card over the weekend using new Dandelion stamps. Star angel is actually a Christmas release but you can use it for everyday cards too. I ended up making a shaker card. I actually made several shaker cards that I'll post later this week. 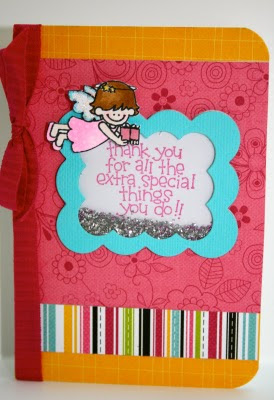 I bought a bunch of these new Bo Bunny double sided papers from Ben Franklin Crafts Market City store. Love the colors in this release. 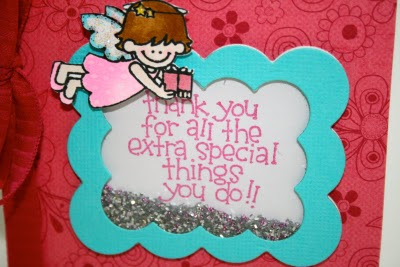 I used chunky glitter and MS tiny beads for the shaker part. Hope you're having a great evening and thanks for stopping by!
Posted by Cheryl at 11:42 PM 6 comments:

Today is Friday but this is creepy Tuesday from TGF. She is one of my favorites from this line. I tried so hard not to color her clothes pink so I chose my second favorite color which is turquoise. I wanted to give this card that distressed look so I used my Tim Holtz distressing tool and distressed around the edges of the yellow paper. The background is a TH fades folder called "Rays". It looks better when you use white core paper and sand the embossed parts of the design. 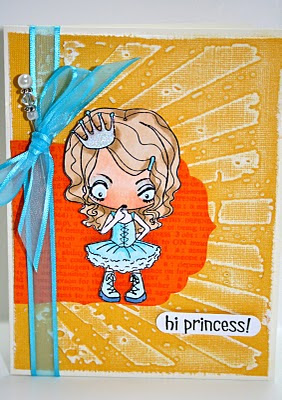 I pop dotted everything on this card to give it dimension. Sorry for the darker photos but there was no sun in my kitchen while I was taking the pictures. 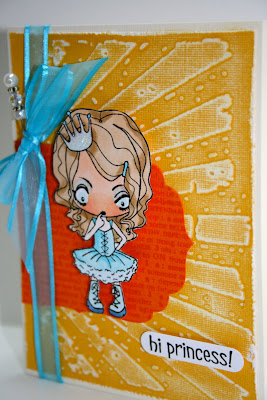 I even made that corsage pin. I was in Walmart the other day and was so excited that I found a box of corsage pins and then I headed to their bead isle and bought some swavorski (sp) crystals and pearls and matching beads. I made a bunch of them in other colors. 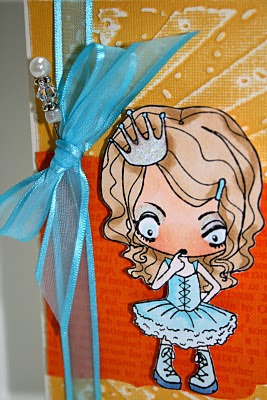 I can't believe the weekend is already here. Seems like just yesterday was the beginning of the work week.
Thanks for stopping by today and have a great weekend!!!
Posted by Cheryl at 11:55 AM 7 comments:

This past weekend was my girlfriend Teri's birthday and what started off as a card, ended up becoming a gift card holder. I know I'm confusing you but I usually know in my mind what I'm making and sometimes I end up doing a total opposite. I started off with coloring this cute girl image from Hero Arts "sending smiles" stamp set but decided that I didn't want to make a card. 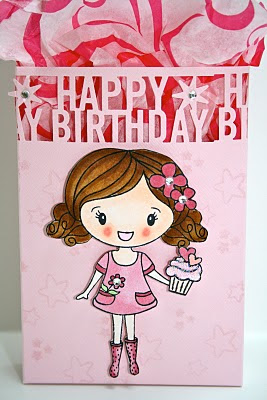 Instead, I made this crayon box and punched the happy birthday along the top edge of the box and took out a bunch of different star stamps and stamped the background. I used VersaMark champagne ink because I like sutle backgrounds. This is the same box that I made a couple posts below. The cupcake is a Dandelion Designs stamp. It fit perfect in her hand. 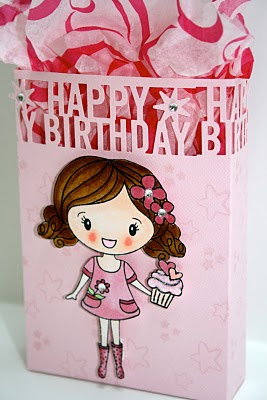 And because we both like pink, everything had to be pink. I recycled the pink tissue from one of my purchases at Aunt Vickies. Can you tell???
Hope your day is going great. Thanks for stopping by and have a wonderful humpday!
Posted by Cheryl at 12:30 PM 4 comments:

Email ThisBlogThis!Share to TwitterShare to FacebookShare to Pinterest
Labels: Another crayon box

Well, hello and good morning. For today's card, I haven't made one of these in awhile which is a card on a card. I cut the smaller card out with a Sizzix die called kit #2. I used Maria from TGF stamps roll call. 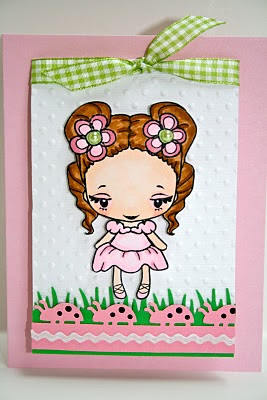 This card actually started off with the MS ladybug border punch. I was testing the punch and the next thing you know, I picked up Maria who I just colored a week ago and took it from there. The grass piece was a leftover from another card. 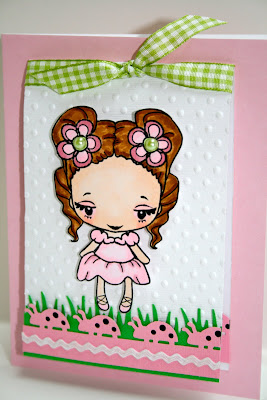 Can you tell what my favorite color is? I try so hard not to use pink all the time but for some reason, I am always drawn to take pink cardstock out from my drawer. Lol! 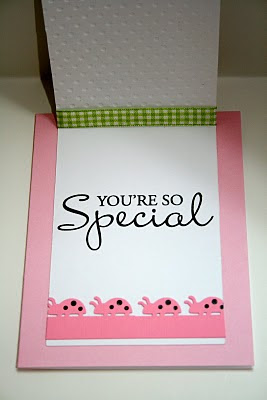 Here's the inside of the top card and I used the rest of the ladybug punched piece to decorate it.
You can also write something in the base card too.
Hope your day is going well. I have to get ready for a phone conference call. Thanks for stopping by and have a great Monday!!!
Posted by Cheryl at 10:54 AM 3 comments: